So, here’s another list inspired by Abbi over at Where the Wild Things Are.  I never write about TV but couldn’t resist the temptation to share my favourite British comedies because, when I’m not watching films, I’m probably watching one of these.  Because I love these shows so much I’ve gone on a bit, so will split my top 10 in two.

In no particular order here’s part one…

I love Love Soup.  It’s just a shame that hardly anybody ever heard of it, much less saw it.  Love Soup is a wonderfully warm and gentle comedy about Alice, a 30-something woman from Brighton who runs a department store make-up in London and Gil, an American writer living in England.  They are perfect for each, but have never met.  As we watch the events of their lives unfold (including watching them both meet a variety of Miss and Mr wrongs), we hope that somehow they’ll find each other and get their well-deserved happy ending.

Managing to perfectly pull off that oh so difficult task of being at once down right hilarious and heart-breakingly poignant, Love Soup really deserves a bigger audience.  The writing is tight, the performances are top-notch and the whole thing is just so expertly crafted I defy anyone to see it and not find something to like.  Plus, with such an impressive array of on-screen talent including Tamsin Greig, Michael Landis, Sheridan Smith, Monserrat Lombard and Mark Heap – not to mention the many wonderful cameos – Love Soup really is one of my favourites. 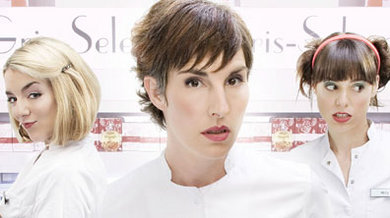 Alice (centre) and her staff, Cleo (left) and Milly (Milly)

Not to be confused with Dutch WWII drama Black Book, this is another sitcom starring Tamsin Greig.  This time she’s not the lead, but a supporting player.  An enabler to one of the most brilliant and awful drunks ever to grace the small screen – Bernard Black.  Bernard (expertly played by Dylan Moran) is a boorish misanthrope who runs a little second-hand bookshop.  He despises anyone who would dare to buy a book, he rarely washes, he doesn’t really take care of himself at all and basically just wants to drink wine and smoke all day with his friend Fran (Greig), while hurling abuse at his assistant Manny (the unique and wonderful Bill Bailey).

Like Love Soup, this series is a who’s who of the British comedy scene with cameos from anyone and everyone who was working in comedy at the time.

The good thing about the good old BBC in the 80s is that a show could totally bomb and they’d give it another chance.  And thank god!  Series one of Blackadder just isn’t good.  It just isn’t, well, very Blackadder.  By Series two, and with Ben Elton on board to help with writing duties, they cracked it.

Edmund Blackadder (Rowan Atkinson) is our anti-hero, sometimes suave, always devious and usually unlucky.  He plots, cheats, lies and schemes his way throughout the ages (Elizabethan, Georgian and WWII to be precise).  Each Blackadder has his own Baldrick (Tony “we’ve uncovered a series of small walls” Robinson), the long-suffering man-servant, and stinkiest man alive.  There’s also a dazzling cast chock a bloc with a plethora of British comedy legends including, but not limited to Stephen Fry, Hugh Laurie, Miranda Richardson, Ade Edmondson and the late, great Rik Mayall (may he rest in peace, god love ‘im). 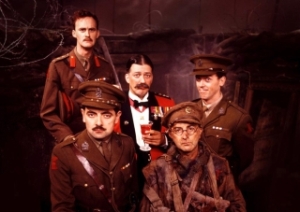 Written by Jeremy Dyson, Steve Pemberton, Mark Gatiss and Reece Shearsmith and performed by the latter three (who play all the characters between them), LoG is truly unique.  The myriad characters, the original story lines and the wonderful performances all combine perfectly to create a grotesque, horrifying and darkly comic sitcom, the likes of which I’ve certainly never seen before, or since.

The creators/writers/cast. They look pretty normal, huh? Well, they have seriously twisted minds!

The boys’ love of all things horror virtually spills out of every corner of the fictional village they created for their character to inhabit – from the in-bred shop-keepers (“we didn’t burn him!”) to the vicious employment restart officer… From the toad-loving Dentons and their spooky twin daughters, to the creepy landlord who spies on his tenants via hidden cameras…don’t even get me started on the arm transplant, the terrifying sexpert “Daddy”, the suspicious village butcher or Papa Lazarou…  You can easily visualise their mis-spent youths, locked away watching old horror films, Twilight Zone episodes, and Tales of the Unexpected.

The show, which ran for three series, spawned a live stage show, a live panto (which I had the pleasure of seeing in the flesh) and a feature-length film.  Oh, there was also a Christmas Special which is, incidentally one of the scariest things I’ve ever seen.

Centring on the lives, loves and ridiculous misadventures of Mark (the sensible, up-tight, serious one) and his flatmate Jeremy (the habitually unemployed wannabe musician with a penchant weed and “doing it in the bum”), Peep Show is Channel Four’s longest running comedy.  The innovative style only helps add to the cringe-inducingly realism – if you haven’t seen it, it’s all shot from the first person POV, with Mark and Jez’s thoughts said aloud for us, via voice over.  Even after all these years, the dialogue is still fresh, and the story-lines hilarious.  It also features the wonderful Olivia Colman.  Love her!

OK, so I actually bloody love this one.  I’ve watched every episode so many times that almost everything that happens in my actual life reminds me of something from Peep Show.  So, I’ve never accidentally killed someone’s dog, tried to burn or eat the evidence.  I’ve never broken into my office, thrown a photocopier down the stairs or unleashed the foam of a fire extinguisher all over someone I’m trying to cop off with.  I’ve never pissed myself in a church, tried to get my friend sectioned or driven then crashed my boss’s brand new BMW when I don’t even have a license.  And yet somehow, in spite of the often outlandish scenarios out hapless heroes find themselves in, it really does ring true.

24 responses to “My top 10 British comedy series, part one”