What the shit was that…?!  Well, as far as I can make out that was a cheaply made yet effective, action-packed, blood-soaked, outrageous and pretty damn funny horror film, that’s what.

It starts out in a seriously cheesy, naff way and I was think ‘oh shit, what’s this load of old tut?’ and there’s an element of that all the way through.  But, there’s such a knowing, self-effacing humour here, that I couldn’t help but appreciate what they’ve gone and done.  Plus they actually made the effort to create some real effects, instead of all your CGI bollocks, so that’s a heap of points right there.

Feast is a simple film, one that sees its suitably disparate characters trapped, nay besieged, in a dessert-bound bar, in the middle of nowhere.  But what are they trapped by?  You only have to look at the DVD cover (or that picture down there) to see what the thing looks like, even if you still have no idea what the gruesome creature actually is.   I just watched the whole thing and I still have no idea. 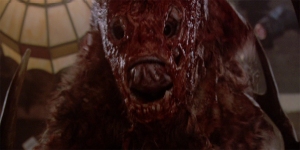 I don’t fancy yours much.

All I do know is that this is the kind of film where it’s best not to get too attached to any particular character because, chances are, that they won’t make it to the end credits in one piece.  And as far as I’m concerned, you have to appreciate a horror film that will kill off any character, regardless of age, gender or ethnicity.  There’s also no respect for the safety of people who set out their stalls as the leader or the hero, so, that’s fun.

All in all Feast is a fun way to spend 95 minutes.  You could do worse this Halloween.

Incidentally, I just watched this trailer which explains what the creatures are!  If you think you might watch it, maybe give the trailer a miss though, I think I liked it more not knowing.