Remember when Luc Beson was awesome?  Remember Leon?  One of the BEST FILMS ever made.  Well, Lucy is a long way from that.

Leon: one of the best films ever made

The basic premise for anyone who hasn’t seen it, demands that we believe the fallacy that humans only use 10% of their brains.  Once you’ve suspended your disbelief, it might be easier to accept that a street drug has been created that unlocks the brain’s full potential, allowing the user to access the other 90%.  You might be able to further suspend your disbelief that this doesn’t only turn you into a super-boffin-hyper-intelligent-mega-brainiac.  POTENTIAL SPOILER: it also makes you psychic and super-strong; gives you telekinetic powers; gives you power to control electronic devices and allows you to shape-shift and…well, that bit at the end?  I don’t even know what that was.  END SPOILER.

What the shit was Beson smoking when he came up with this?  I don’t think it was anything that enhances your brain-power, that’s for sure.

Anyway, Scar-Jo plays the titular Lucy.  She’s an American student in Taiwan who ends up as a drug mule, forced by Min-sik Choi (legendary star of the absolutely wonderful Oldboy) to smuggle the new drug back home to America.  When the package leaks into her system she begins to change, rapidly developing astounding, super-human abilities.

Scar-Jo is straight-faced and totally deadpan throughout, with a detached other-worldly air.  She’s cold and unrelenting and seems utterly devoid of emotion as she shoots and kills her way across continents.  But this makes Lucy feel one-dimensional which is unfortunate when you see how similar qualities worked so well in Under the Skin. 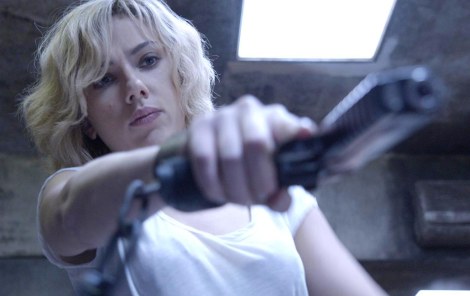 Johansson is good and the visual effects are solid, and while Lucy starts well, it soon descends into absurdity.  Towards the end I’m not sure I had any idea what was going on, but honestly, I didn’t really care.

Nobody else is really given very much to do which is a shame when you consider what Min-sik Choi is capable of.  Oh, Morgan Freeman’s in it too.